Fight director UK. All theatre fights and stunts, TV and film fights and all horse action.

Renny Krupinski is undoubtedly one of the most experienced, busy and innovative UK fight directors working today. He is very much a renaissance man and a polymath with the highest credentials.

Renny works as an Equity Registered UK fight director, fight co-ordinator, stunt co-ordinator, fight arranger and has worked as an intimacy director on many productions for some of the most prestigious companies in the entertainment industry. His work in theatre, television and on film has won him many glowing reviews and plaudits from some of the leading directors and artistes in today’s profession.

THEATRE:
Theatrically his work with The RSC, The National, Shakespeare’s Globe, The Young Vic, National Theatre of Scotland, Citizen’s Theatre Glasgow, Edinburgh Lyceum, Birmingham Rep, Theatr Clwyd, Sheffield Crucible, Leeds Playhouse, London’s West End and the multi-awarded (and lauded) film Tyrannosaur, has allowed him to maintain his position at the very top of his profession.

His attention to detail and his ability to tailor every trick, fight and stunt to the individuality of each situation, style, director and artiste, brings an immediacy and vibrance to each production he works on. 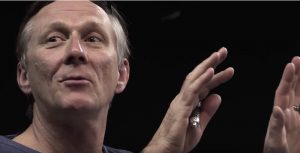 TRAINING:
Renny is a completely independent fight teacher unaligned with any organisation, academy or society, concentrating purely on the teaching of knowledge for the next generation with his own unique expertise.

He has held positions as fight master at Manchester School of Acting (Manchester Metropolitan University) & Arden School of Theatre. He has been Chair of with two leading teaching academies and was elected to serve on the British Actor’s Equity Stage Committee and the Equity Creative Team Specialist Committee, The Equity Register of Fight Directors and The Equity Register of Fight Directors Working Party. He has also had huge success teaching students and actors with special needs.

Constantly inventing new tricks, he is often imitated but never equalled. He brings a unique and complete theatrical stunt service to the international theatre scene. With over 40 years professional experience, every aspect of whatever you need is covered to achieve whatever is required expertly and safely with inspiration, innovation and highly-driven motivation.